The Modern Revival of the Ancient Hellenic Religion and Philosophy

Hellenismos is a contemporary revival movement of the ancient Greek polytheistic religion and culture. Followers celebrate the ancient gods, culture and philosophy. Though Greek mythology and the ancient Greek religion overlap, they are not the same. Homer, an ancient Greek poet, wrote the the "Iliad" and the "Odyssey," which both shaped Greek culture for centuries. The ancient Greek religion didn't have an official religious text or clergy, instead priests and priestesses looked over "cults" or groups of followers. Followers made offerings to the gods which in turn guided them through life. Much of of the religion was personal worship and interpretation, according to Britannica Online. Myths provided context for the beliefs and characteristics of gods and heroes. 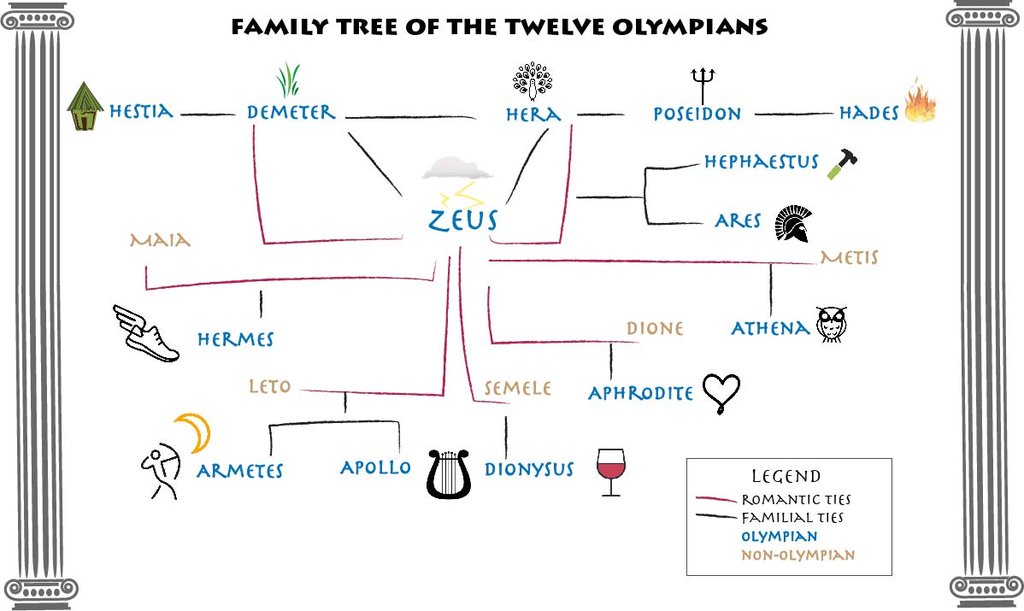 The ancient Greek religion consisted of ritual celebrations at temple sites, sacrifices to the deities, and festivals. Each of the Greek gods had specific personalities and powers. The 12 main Olympian gods were the principal deities. They were believed to live on Mt. Olympus (except Hades, who is not always considered an Olympian because he resided in the Underworld.) The gods are celebrated more than "worshiped," because they are embodiments of moral values rather than existing beings.

Click here to see a map of Greek Temples

Ancient Greeks celebrated their gods at temples, many of which still exist in Greece. Greek temples were viewed as homes for the individual gods they served, allowing followers to place offerings of food and beverages on a daily basis. Temples, or in Greek called temenos, were usually lead by a high priest or priestess. Members of Hellenismos hope to use these sites for their worship, but the Greek government requires permits and payment for these gatherings, according to the Supreme Council of Ethnic Hellenes. Many temples serve as landmarks and tourist destinations, for example, the Acropolis Museum received around 1.5 million visitors last year.

According to George Kalantzis, the Secretary of Religious Affairs at the Greek Ministry of Education, Research and Religion the Greek government decided to recognize paganism as an official religion in their country this year. The government says they will allow the Hellenic Ethnic Religion to establish a place of worship, and by an updated law, every exercise of public worship with authorization to an official space is "presumed to be a known religion," a document from the ministry said. Hellenic Ethnics have been waiting to be recognized by the government, and have established their own temples in Thessaloniki. The Supreme Council of Ethnic Hellenes, or YSEE is waiting to be recognized as a religious statutory body in Greece and will approach the European Court of Human Rights in Strasbourg if the Greek government refuses to do so, they said in a statement.

In Greece, the government is closely tied to the Greek Orthodox Church, and 88 percent of citizens are Greek Orthodox. Hellenic Ethnic Religion has struggled to receive recognition for over 20 years according to YSEE. Hellenismos is technically recognized to be a "pagan" belief because of its ancient origins and religious ties to the earth. But, the word carries a negative connotation to Hellenic worshipers. When the word is used by the Greek Orthodox Church, it is used offensively as the church relates Hellenismos to Halloween-like dress up and satanists. Greece as a country began to shift to Christianity away from polytheism during the Byzantine Empire around 330 AD. In Greece, Ethnic Hellenic worshipers said they preferred not to be called "pagan" because of this negative connotation.

Members of the Hellenismos group OΦIΩN (Ophion) during a nighttime ceremony in Greece. Photo courtesy of Ophion.

Today, more than 16 centuries after the decline of Greek polytheism, there is a yearly festival to celebrate the ancient traditions. Prometheia festival occurs every year to celebrate the Greek hero Prometheus, who is known for helping humans steal fire from the gods. The 22-year-old festival gathers several thousand Hellenic followers at the base of Mt. Olympus to celebrate their heritage with dancing, plays, music and food. Tryphon Olympios, the founder of the festival, said the first few years of celebrations, the church was aggressive toward the Ethnic Hellenic people. The Greek former professor of Philosophy at the Stockholm Business School says he hopes the festival will bring awareness to this group of people.

"The people here are confused," he said. "They don't know what Hellenismos is; they have an unusual picture of Hellenismos. They are proud to be Greeks, and yet they don't know that we are celebrating our Greek heritage."

According to Olympios, even though there are many different Hellenismos groups, they have similar beliefs. Prometheia festival allows them to gather and celebrate their heritage together. The festival falls on the summer solstice every year.